THE NEED FOR CONTROL

There is long history of control methods for the wonderful, amazing, and dangerous coyote for decades.
For decades coyote have caused issues in the following manner (but not limited too);

1. Injuring and killing and eating Livestock

3. Causing injury or deaths of humans (2 deaths in North America)

Those with coyote issues want ever method of control possible used and over the years many have been.  Yet there is great confusion on what methods are used today.  Here is alist of current control methods we are aware of;

1. Calling- The hunter imitates the sound(s) of a prey animal of the coyote to lure them in close. This requires great skill, time, and patience.

2. Stalking-Includes tracking and walking in coyote habitat areas- This is very very hard.

3. Trapping- Generally leghold traps are used and requires great skill to be successful.

4. Cyanide Gas Trap- Most states that allow this method require a special permit and training or it is restricted to government use only.  It is an extremely effective method and is canine specific and acts very quickly.  The cyanide only effects

the coyote taken and does not spread to other animals who might feed on the carcass. It is NOT dangerous to non canine animals for the most part.

5. Snares-  Can be a neck snare or leg snare and required special skills to be successful.  Some states restrict the use of snares.

6. Cage trap-It is nearly impossible to get a healthy rural coyote to go into a cage trap.  Rare would be a good word.  Most states require a special “relocation”permit for any wildlife too.

7. Poison- The chemical 1080 was once used extensively for coyote control but is no loner used and is not legal in any way. Presently there are no poisons used in the United States.

8.  Bite collars-Presently restricted to use on sheep for protection.  The collar is only effective if the coyote attacks the sheep and tries to bite it around the neck.

9. Airplanes and Helicopters- Called aerial gunning, it requires a special

permit and training and in many states id restricted to government use only.  It is highly effective but very expensive.

10. Drives- These were popular decades ago and were semi effective.  Hunters

would walk evenly spaced though a coyote area and “drive” the coyotes toward other hunters who would then shoot them as they approached.  For the most part this  method no longer used.

11. Truck Hunting- This involves patrolling and searching coyote areas while in a vehicle and once seen the coyote is shot from the truck. Most states do not allow shooting from the road, across a road, or from a vehicle now. trespassing can be an issue here too.

12. Hounds– Scent tracking dogs are used to find a recent trail of a coyote then the hounds follow the

scent pushing the coyote toward waiting hunters.  In some cases the coyote is caught by the pursuing “trail” hounds.  A ‘trail” hound catching a coyote it is tracking is fairly rare though.

some of the 1970’s.  This involved a specially built “dog box” on the back of a 4X4 truck where the “sight” dogs would have a slot or window they would look out of and watch for the coyote.  When the driver saw a coyote he/she would line up the truck and release the “site” dogs to chase the coyote.  The “sight” dogs used were generally of the Grey Hound type breed that were very fast runners.  Most of the time the “site” dogs would catch the coyote very quickly.  Due to increased issues  of trespassing, cost of equipment like trucks, and cost of gasoline this method has all but faded away today.

14. Night hunting- This method is very effective when coupled with calling.  Many states do not

allow hunting at night for other reasons but laws are changing for applications for coyote control.  This method is hard and the greatest care must be taken at all times to be safe. It involves using a game call and a spotlight to locate coyotes responding to the call.  The skill in shooting at night is extreme to say the least. 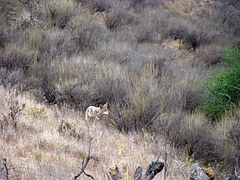 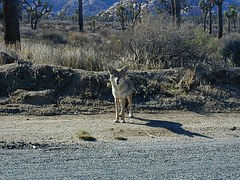